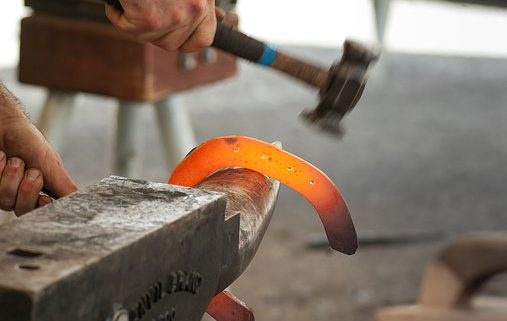 When I took over the company in September 2015, I was overwhelmed with what I didn’t know.  Although I had been part of the business for almost 25 years, horse care fell fully to my late husband.  In November of that year, I contracted the services of Glenn Stewart, an internationally recognized natural horsemanship trainer and certified farrier.  I brought him to my farm where he initially spent three days with us going through our entire operation, encompassing everything from farm to town.

One of his observations was that  some of our horses were not being balanced properly in their bodies, via their feet.  While I was open to the idea of a change in our shoeing program, I wanted to do so with careful thought and consideration.  At that time, we were using rubber shoes with a steel core.  We’d been using these shoes for years with the idea that while they could not be adjusted much to treat specific joint or hoof issues, they provided traction and cushion for the horse.

I consulted further with Glenn and other experts: my learning grew and I started to explore options.  Over the next six months Tally-Ho tried three different alternatives with no real success.  In May 2016 we met Will Clinging, a well-respected certified journeyman farrier.  Under Will’s lead, we decided to try two of our horses in steel shoes with borium for traction.  He, and his team, custom made each shoe according to the individual horse’s need, ensuring his gait and body posture was correct (much like orthotics for humans).

These horses were then closely monitored for both positive and negative changes in their biomechanics and gait.  Both horses started moving better throughout their entire body, especially in their footfall placement which is key to maintaining healthy joints and muscles.  To our surprise, they also showed improvements in their overall coordination and self-awareness.  We were thrilled with the results (as were they)!

Today, Will and his team provide regular hoof care to our entire herd, ensuring their feet are trimmed and shoes re-fit to give them support, protection and traction when working downtown.  The formalized shoeing schedule ranges between 4 to 7 weeks, depending on seasonal conditions and if the horse has any special requirements that need to be addressed on an individual and frequent basis to prevent and treat lameness and unsoundness.  In the winter months we only keep a handful of horses shod and the rest go barefoot while they are not working.

We are thrilled to have Will as a key member of the Tally-Ho team.  He has reached a level of excellence within his profession that is clearly being recognized by his peers! “I am endorsed by the American Farriers Association (AFA) as a Certified Journeyman Farrier (CJF)[1].  I am an approved and updated AFA tester.  I am also the Vice President of the Western Canadian Farriers Association.  I take my trade very seriously!”

“I have been 23 years in the livestock industry, as a working cowboy, a horse trainer and a farrier.  I have even shod horses for our Honorable Lt. Gov. Judith Guichon when I lived in Merritt BC.  I have met and worked on thousands of horses in those combined capacities.  I have worked on backyard horses, ranch horses and show horses in multi-million dollar barns and I have met very few horses that are as well kept and as happy as the horses that work on the streets of Victoria!  This City should be proud to have two world class companies operating as allies on the same streets bringing smiles to most people that see them and a sense of satisfaction and pride to me when I see and hear them walk.”

[1] “Farriers sitting for this level of certification are expected to display in-depth knowledge and highly developed performance skills evidencing a level of professional artistry. The process requires successful completion of written and practical testing, as well as the forging of a specific bar shoe within a prescribed time limit.” (American Farriers Association)