Next up in our Tally-Ho horse breeds mini-series is the Belgian draft horse. While Belgian drafts share some similarities with our two previously featured breeds, the iconic Clydesdale and the majestic Percheron, they have a unique history and characteristics that are all their own.

The Origin of the Belgian Draft Horse

As the name suggests, the Belgian draft Horse originates from Belgium.  Among many breed historians, the Belgian is believed to be descendant from the Flemish “destriers” of the Middle Ages.  The word destrier does not refer to a specific breed of horse, but rather a type of horse.  The destrier, also referred to by contemporary sources as The Great Horse, was highly prized by medieval knights and men-at-arms and was coveted as the finest and strongest of the era’s warhorses.

The foundation stock for the Belgian was originally known as the Brabant, named after the specific region within Belgium from which the breed originates.  Historically, the breed has gone by several names including Cheval de trait Belge, Brabançon, Trait Belge and Belgisch Trekpaard.

The large, well-muscled Belgian quickly gained notoriety as one of the strongest of the heavy draft breeds.  Export across Europe, and exposure in district show circuits which culminated in the National Show in Brussels, established the Belgian breed as a fixture in Belgium’s national heritage.  By 1891, Belgian draft horses taking up residents in government stables in Russia, Italy, Germany, France and the old Austria-Hungary Empire.

The Modern History of the Belgian Draft Horse

It wasn’t until 1866 that the first Belgian was exported to the United States and though the breed was accepted by draft horse enthusiasts, at the time it was not nearly so popular as the Percheron.  Over the next two decades the Belgian gained favour, and in 1887 three residents of Wabash, Indiana – Harmon Wolf, Abraham Status and Nathan Meyer – founded The American Association of Importers and Breeders of Belgian Draft Horses, which was more efficiently renamed the Belgian Draft Horse Corporation of America.

In 1903, the government of Belgium sent an exhibit of their finest Belgian drafts to the St. Louis World’s Fair and the International Livestock Exposition in Chicago, Illinois.  This further solidified the breed’s following in the States and although exports from Belgium experienced significant downturns at the onset of both the first and second world wars, breeding programs in America ensured the Belgian gained in numbers.

Prior to the 1940s the Belgian and the Brabant were essentially interchangeable.  Following World War II, however, the Brabant in Europe was selectively bred to have thicker, heavier bodies and notably crested necks.  Meanwhile, in the USA, breeding programs sought to develop a Belgian draft with somewhat lighter, more agile bodies with taller frames.

In the 1960s a man named Albert Stankiewicz, disappointed in the changes he was seeing in the American-bred Belgians, sought to return the breed to its original pre-war heavy working draft, breeding his imported stallions to old-style domestic Belgian mares. That traditional breed line became known as the American Brabant and its preservation is championed by the American Brabant Association, which was formed in 1999.

Today in the United States, Belgians (together with American Brabant horses) out number all other heavy draft breeds combined.

The Belgian Government produced a National Stud Book in 1886 and the first imported Belgian arrived in Canada in 1902, landing in Quebec.  The Canadian Belgian Draft Breeder’s Association was incorporated in 1907, and since then, there have been over 37,000 registrations. As was the case in America, registrations hit an extreme low during the second world war, but rebounded thanks in large part to Amish and Mennonite communities that remain heavily dependent on draft breeds for farm use.

Past and Present Uses of the Belgian Draft Horse

While many historians claim its original role was that of a mighty medieval war horse, the Belgian breed as we know it today, was founded in heavy agricultural work, logging and hauling.  In exhibition environments, Belgian horses have been reported pulling weights over three times their own body weight.

Developments to the domestic Belgian and Brabant bloodlines have led to an extraordinarily versatile horse.  While Belgian Drafts are still used as working horses, these draft horses often compete in the show ring in halter, hitch and riding classes, and are enjoyed in a vast number of recreational equine activities.

The Belgian is widely considered to be one of (if not, the) strongest and heaviest of the draft breeds.  Early Belgians imported from Europe were seen in a variety of coat colours including, bay, black, chestnut and roan.  Modern-day, North American-bred Belgians have seen a surge in sorrel-coloured horses (chestnut bodies with flaxen manes and tails).

While domestic Belgians have been bred to be taller and slightly finer than their European counterparts, they stand slightly shorter and heavier bodied than the average Clydesdale.  Belgians measure at an average height of 16-17 hands (1.62 to 1.72 metres from the ground to their wither) and typically weigh between 2,100 and 2,300 lbs.  By comparison, the iconic Clydesdale horse can measure 18 hands and still be approximately 200 lbs lighter!

While they may not be known as the tallest of the heavy draft breeds, the world’s largest Belgian Draft horse named Big Jake, was recorded as standing 20.3 hands (2.06 metres) and weighed in at an astonishing 2,600 lbs.

Due to their superb temperament, Belgian horses are gaining popularity as schooling horses and therapy horses in riding programs.  Known as gentle giants, they are quiet and docile in hand and under saddle and yet exceptionally willing to please, especially when they are confident in their understanding of the task at hand.  Belgian enthusiasts will tell you they are exceptionally intelligent and perceptive animals capable of developing strong working bonds with their human handlers.

Tally Ho is honoured to play a small role in preserving this incredible draft breed.  We currently have two purebred Belgians, Remy & Delilah, as well as a pair of Belgian-Percheron cross geldings (Timber and Tucker) whose Percheron origins are detailed in our last horse breed blog.

If you’d like to learn more about our beloved Belgians, or any members of our herd, you can choose to sponsor a horse or visit our website at www.tallyhotours.com to book a tour to experience these majestic horses in person. Can’t get enough of our gentle horses? Take your very own plush horse home to love. Available in 7.5″ or 12.5″ heights, “Clyde” and “Rimsky” are available in our online gift shop. They come complete with pulling harnesses and make a wonderful keepsake! 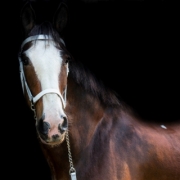 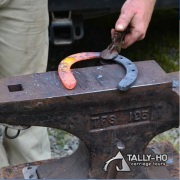 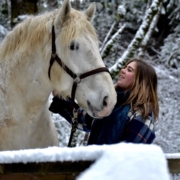 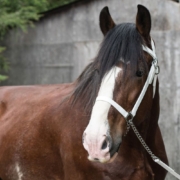 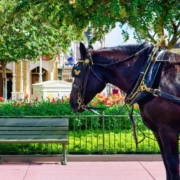 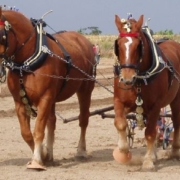 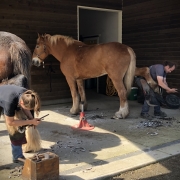 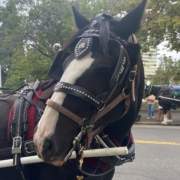 Our Top Picks for Brunch in Victoria BC
Scroll to top